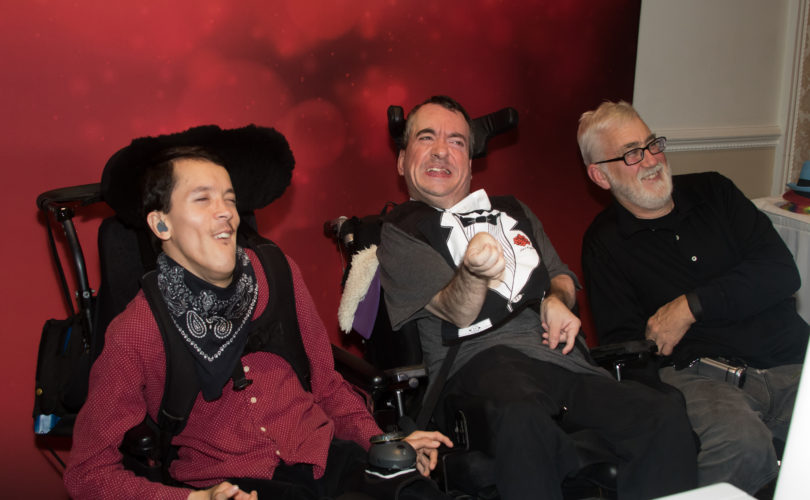 Every year, our annual Party for PYD benefit event dedicated to raising program funds and increasing the awareness of mentoring takes the chance to recognize individuals and organizations within our community that stand out to make a difference. This year, we plan to honor a very unique bond of mentors and mentees – the three-generational mentor match of George Donahue, Gregory Walsh, and Austin Lam.

These three individuals represent what a truly successful match looks like in our program: a caring mentor-mentee friendship that has a lasting impact on one’s life.

Gregory is now 40 years old and lives in Braintree, Massachusetts. In 1992, Gregory learned about PYD from his friend Kara in high school. Kara invited him to one of our former programs called Youth in Preparation for Independence (YIPI) where Gregory and his mentor George met for the very first time.

From the beginning, Gregory and George’s connection was strong. Janice, Gregory’s mother, says they hit it off from the start and became friends for a few years while coming together for YIPI meetings every Friday night.

Once they found out about PYD’s mentoring program, they asked Regina to make their mentor-mentee match official.

“It was just a natural fit for the two of them,” explained Janice.

Janice then went on to explain how George took Gregory under his wing, continuously protecting him like an older brother. Because Gregory is non-verbal and uses an eye-tracking speech generation device to communicate, George always ensured he was included in dialogue, and made sure to be aware of and ask for his opinions.

“George was my friend, as well as my mentor. George always kept an eye on me to make sure everyone knew that I knew what was going on. He could always read my yeses and noes,” Gregory explained.

As their mentorship grew stronger, the two realized they had things in common: they both loved playing chess!

Sometimes Gregory and George played virtual games of chess, but their favorite memories are when they played in the Watertown Common on Thursday nights while they listened to the live band every week, which quickly became a tradition between the two.

George, who has a form of Muscular Dystrophy, has volunteered with us going as far back as the 1980s when PYD was founded.

As you may imagine, George’s mentoring career is most definitely extensive. Before being matched with Gregory, George mentored a young man named Joao and another named Christopher.

When asked what inspired George to become a mentor, he shared how once he became diagnosed with a disability and began to use a wheelchair, he contacted Big Brother Big Sister in hopes of mentoring a child with a disability. The woman at Big Brother gave him Regina’s phone number, and the rest was history.

“I’ll be honest with you, I learn more from them than they learn from me,” explained George.

Gregory always knew George acted as a protector of him growing up, which then influenced him to be that figure for someone else.

Gregory was matched with Austin in 1999 when Austin was just six years old. Austin’s mother Pam thought it would be beneficial for him to connect with a mentor, and she was right.

Austin and Pam’s first experience meeting the Walsh family was 20 years ago for Sunday brunch at the Walsh’s home.

Gregory and Austin’s bond is special for many reasons – one being that they both have the same disability, cerebral palsy. Both have a designated communication device and face a multitude of the same challenges. Austin explained that as he got older, Gregory helped him conceptualize the challenges of cerebral palsy one runs into entering adulthood.

“He has helped me understand that I am not the only one out there that does things in a different way to get the same results that an able-bodied person accomplishes; sometimes it takes us a little longer, but it’s all good,” said Austin.

The match and their families had many outings and bonding moments after their first time meeting, like bowling, Red Sox games, trips to Foxwoods to gamble for Austin’s 21st birthday, touring the tall ships in the Boston Harbor, and so much more.

Not only did the two create an inseparable bond, but their families did as well. Austin’s mother Pam explains how she has learned a lot from Janice and the Walsh family on raising a child with cerebral palsy:

“Janice has been a wealth of resources for me over the years because she’s already experienced and gone through all of this, so if I ever have a question about health or communication, I can always ask her.”

The families still keep a close friendship to this day.

RSVP to Party for PYD on June 17th, and help us celebrate our remarkable intergenerational match!