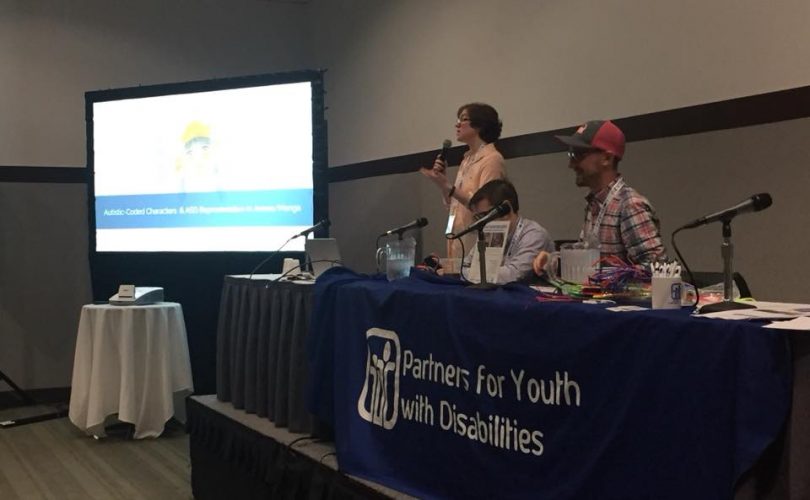 PYD had the first ever opportunity to present an original panel at Anime Boston 2018 on March 30th! Our Highland Street Ambassador of Mentoring & Recruitment Specialist Jordan Lome, Steve Slowinski from our National Inclusion Center, and Mentor Match Specialist Mike Haydu (all of whom are major anime/manga fanatics) collaborated together with PYD youth in the program, writers on twitter, and students who have autism/autistic students on anime/manga characters who they can identify with as being coded or represented with having ASD, providing their own experiences with how anime and manga has empowered them!

Over 120 people were in attendance, including some PYD youth, in what was a packed house that eventual became standing room! Youth started enthusiastically sharing accessibility resources at the convention with our PYD hashtag even before the panel got started! Audience in attendance includes special education teachers, YMCA employees, youth and adults with autism/autistic youth and adults, and many more!

Topics discussed included understanding what Autism/ASD can look like and the Neurodviersity Paradigm, which “refers to the idea that neurodiversity is a natural & valuable form of diversity” and how “we should view [ASD] as simply another way of being. It’s not abnormal, which carries negative connotations.”-ASAN

The panel then talked about anime and manga (Japanese animation and graphic novels) that feature representation of ASD, including a webcomic by Japanese cosplayer Akagi Kuro on living with Asperger’s and the series With the Light: Raising an Autistic Child by Keiko Tobe! The former is not licensed but can be found online while With the Light has 8 volumes licensed and can be found in the Boston Public Library!

Akagi Kuro: “Some good personality traits of having Asperger’s are: intense focus, excellent memory, and more.”

We can focus on completing a project.
We can become super knowledgeable on a certain subject.

“Rather than just being able to do ‘normal things,’ I think it’s much more amazing to make use of those skills and do something no one else can do.”

(translation by Louise from Goboiano)

The panel explored how autism or ASD can be visually represented in anime/manga, from character headcanons (theories about a character not shown or stated in the material), to seeing how those traits could be coded in certain characters. We looked at both positive and negative examples of how autism could be coded or represented. Our panelists not only shared their experiences working with or having ASD in relation to this project, but opened the discussion to a standing room and packed audience to share their stories using the #PYDatAB2018!

Audience participants then got to share their own characters they identified with! Anime Boston staff writer Lauren Orsini wrote on some of the characters mentioned during the panel here!

You can also watch the full panel on PYD’s Youtube channel!