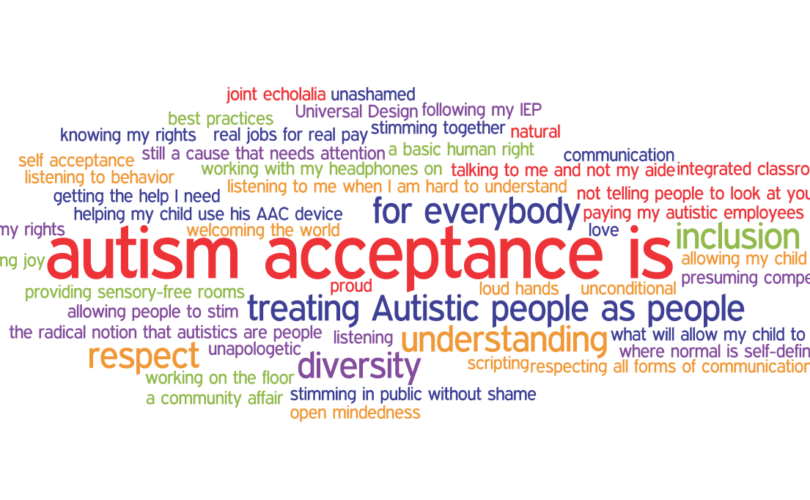 It’s April, so if you’re like me, your social media feeds have been dominated with Autism Awareness Month profile pics and messages. I don’t have the stats to back this up, but anecdotally, I feel like Autism Awareness Month has become one of the most mainstream, widely known awareness months out there (ranking just behind Breast Cancer Awareness Month, in my eyes). It’s impressive, and a testament to the hard work of the autistic community and advocates!

That said, before you change your own profile pic or “Light it up blue,” I’d encourage you to consider supporting a different cause this month: Autism Acceptance Month.

Autism acceptance means treating autistic people as members of a minority group who are entitled to the same rights as everyone else. It means changing the goal for autistics from “indistinguishability” or “recovery” to living with needed supports and gaining equal opportunity with neurotypicals — supporting autistics as they are. It means helping autistic children grow into autistic adults, rather than mourning the nonexistent neurotypical child they never were.” [Source: Autism Acceptance Day, Autistic Self Advocacy Network]

For such a small change in words, reframing April as a month of acceptance is a powerful concept. I think people are pretty well aware of autism these days! The current research suggests that 1 in 68 children have autism, and after years of media saturation and national discourse, I’d challenge you to find someone that has never heard about autism before. But in the words of Autistic Hoya, “Not all awareness is good awareness, and awareness itself can be the farthest thing from acceptance.”

For years, any discussion or news around autism has always focused on one thing: finding a cure. Vaccines are to blame! Maybe we can find the gene that causes autism and fix it! If you have an autistic child, these are the therapies you have to do so they can be as normal as possible! We’ve focused all our collective energy on seeing autism as a problem that has to be fixed and cured.

But–and here’s the radical idea–maybe autistic people don’t want to be cured. Maybe they like themselves just as they are, and they’d like others to be more accepting and understanding of them. Instead of investing our money in research for a cure, why don’t we spend more money providing services to autistic people that allow them to have more happy, empowering, and successful lives?

“[…]the concept of a “cure” for autism is profoundly unethical and leads to dangerous and even deadly consequences for autistic people. It is also out of line with the consensus of the scientific community, which has recognized the idea of cure as scientifically implausible. Research towards “cure” does not help autistic people or our families, and after decades of protest from autistic people, the public has begun to realize that a world without autistic people is not an ethical or desirable goal.” [Autistic Self Advocacy Network]

Maybe allistic people should instead value the many strengths and abilities that autistic people have, and view autism not as a problem, but simply as a difference. Not abnormal or invaluable, but instead, as a normal and valuable part of the range of human expression and experience.

So this April, I encourage everyone: let’s try to be more accepting.

If you liked this post, check out our additional resources on Learn.PYD.org. We have a webinar recording on Autism Acceptance Month & promoting neurodiversity in the workplace with ASAN
and we have an online courses on autism and neurodiversity!

In order to succeed in school and at work, youth and young adults with disabilities need to know how and when is appropriate to

Stop me if this sounds familiar: you’ve put effort into designing your program or organization to be inclusive of people with