Representation for People with Disabilities in Film and Television 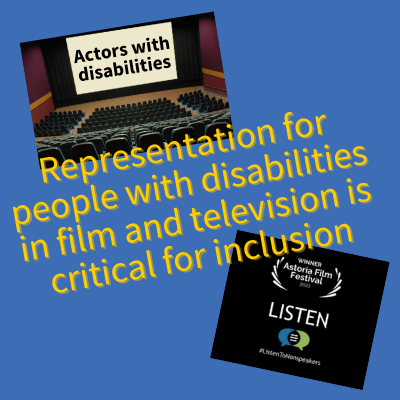 Representation for people with disabilities in film and television is critical for inclusion.

The media is a powerful component of our daily lives; the characters we see and the world in which they are portrayed in, has a profound effect on our understanding of people and culture, and on our own perception of self-esteem and value.

In February 2021, singer-songwriter Sia directed a film called Music, which portrays a teenage girl with autism. The director was criticized for her casting of a neurotypical actress, Maddie Ziegler, in the role. The film also contained depictions of the use of physical restraint of the character which perpetuates harmful misconceptions of autism.

Historically there has been limited representation of people with autism in film and television, particularly by actors with autism, let alone nonspeaking people with autism. Backlash from critics in response to Music sparked thoughtful conversations on the depiction of disabilities in the media, but CommunicationFIRST wanted to go a step further and take action. A staunch advocate for people with speech-related disabilities, CommunicationFIRST asserts, “Genuine representation and inclusion are essential for our people to rise out of invisibility, erasure, isolation, segregation, and extreme marginalization.”

Sia’s Music inaccurately portrayed the capabilities of nonspeaking autistic people, which reinforces negative stereotypes of communication. For example, the character Music was not always shown with her AAC (augmentative and alternative communication) device, and when she was, it was used only for simple phrases. One viewer said, “I have worked tirelessly on my AAC skills. So, I found how they showcased her use of an AAC device to be cliche, ignorant information about the potential communication capabilities of autistic nonspeakers.”

On the film’s use of restraint, a viewer said, “I think what adds to the danger is how ‘mild’ and quickly resolved things were using the restraint.” What we can take away from these reactions to the film, it is clear is that representation of autism in film and television needs to be informed and ideally produced by actors with autism.

In response to the threatening nature of Sia’s film on the great strides towards disability inclusion today, CommunicationFIRST made their own short film titled LISTEN, which was made by and with nonspeaking autistic people. LISTEN aims to correct these misconceptions and demonstrate that nonspeaking people with autism can do everything that speaking people can. The film acts as a critical call to action for inclusion, stating, “Nothing about us, without us.” CommunicationFIRST contends that nonspeaking people want others to know that they still hear, and they shouldn’t be left out because people think they can’t participate.

In the ten months since its release, LISTEN has had a remarkable impact- winning two awards and featured in Time Magazine, The Independent, and BBC Radio. Most importantly, the film paints a raw, real, and uplifting picture of the experience of nonspeaking autistic people. LISTEN holds the power and potential to inform people of the real-life experiences of nonspeaking people with autism for years to come.

PYD’s mission is to improve the livelihoods of youth with disabilities and build a more inclusive world. We applaud CommunicationFIRST; their production of LISTEN is integral to improving representation and an important step in our vision of a more inclusive world becoming a reality. For more information or to view the film, visit: https://communicationfirst.org/listen/

This article was written by Katherine Macneil of the BU PRLab.