Celebrating 30 years of the ADA 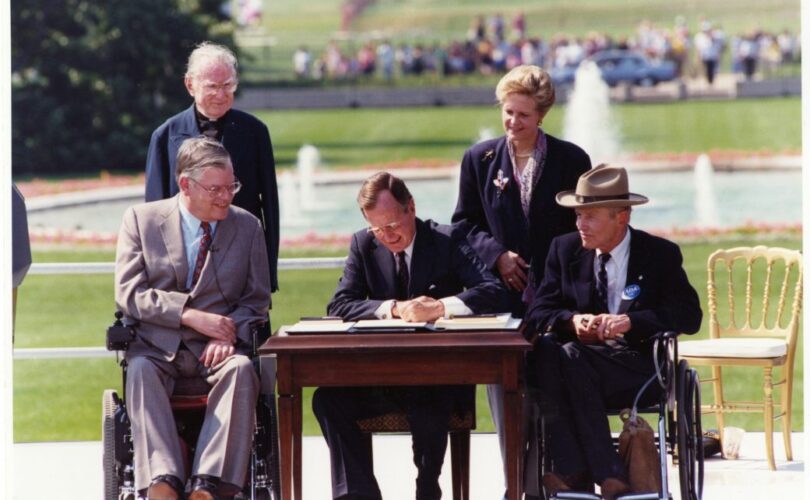 Thousands of disability rights supporters gathered on the South Lawn of the White House on July 26, 1990 to witness the historic signing of the Americans with Disabilities Act (ADA). This historic event coincides with PYD’s 35th anniversary on July 1!

The ADA is a civil rights law banning discrimination against persons with disabilities.

“It promises to open up all aspects of American life to individuals with disabilities – employment opportunities, government services, public accommodations, transportation, and telecommunications,” President George H.W. Bush remarked in his address prior to signing the law.

The ADA was the first legislation specifically addressing the rights of people with disabilities in all public places, including companies and communities. “It will ensure that people with disabilities are given the basic guarantees for which they have worked so long and so hard: independence, freedom of choice, control of their lives, the opportunity to blend fully and equally into the rich mosaic of the American mainstream,” President Bush said.

President Bush also recognized the value that people with disabilities bring to employers and the workplace, noting that “they want to work and they can work. This is a tremendous pool of people who will bring to jobs diversity, loyalty, proven low turnover rate, and only one request: the chance to prove themselves.”

Indeed, the ADA has brought greater opportunities to people with disabilities to belong to communities across America through increased access to employment, recreation, transportation, and communication. PYD thanks the many companies and corporations that have realized President Bush’s promise of workers with disabilities as diverse, loyal employees. Yet, there is more to be done as there are still many businesses, buildings, stores, restaurants, websites, and public places that aren’t accessible and aren’t inclusive of people with disabilities.

PYD is committed to championing the rights of people with disabilities, and you can too. To take action today, we encourage folks to take our online course Understanding disability rights & the ADA or to share it with others in your organization. With your support, PYD is privileged to continue to advocate for inclusion and equity.

Learn more about the ADA or the historic signing on July 26, 1990 by following the links below.

Watch the signing of the ADA

Transcript of Statement by the President July 26, 2020

More info about the ADA

This blog post was written by Joanna Dumas, our Development Manager.