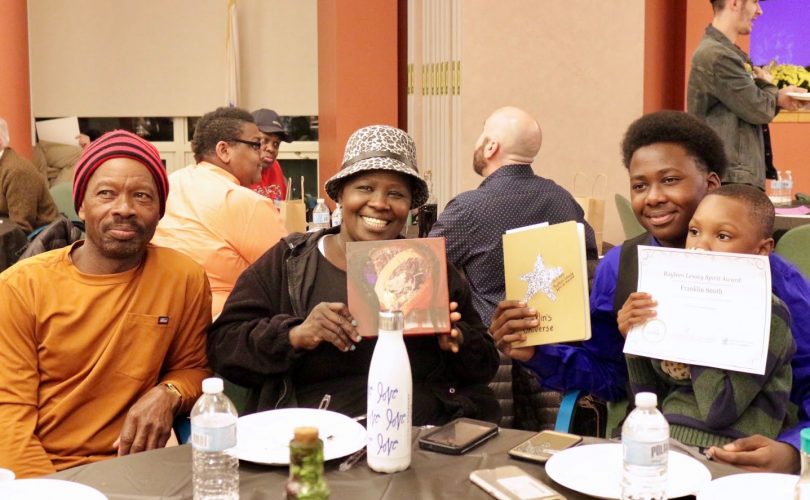 Franklin has volunteered at PYD for approximately two years. His involvement began at the age of 12 when his older sister, who worked with PYD at the time, encouraged him to become a volunteer. Now a freshman in high school, Franklin continues to volunteer at PYD events and activities.

Through PYD’s Access to Theater program, Franklin has found a way to intermingle his favorite hobby: singing, with volunteering. Outside of school and PYD, Franklin is part of the Boston Children’s Chorus.

“I like doing the different types of acting, music, art, and playing different instruments,” said Franklin. “Everybody does what they like to do and it’s really fun.”

When awarded the Raylee Lesacy Spirit award, Franklin expressed his gratitude for such a fun and welcoming community. The Raylee Lesacy Spirit award honors individuals that are devoted to making impactful connections, as well as those involved in the Access to Theater program. Access to Theater is a program offered by PYD that focuses on performing arts exploration and experimentation. You can read more about our program at this link: https://www.pyd.org/programs/theater-arts/.

“I didn’t realize how much fun I could have,” said Franklin. “Before, I thought I couldn’t have fun with the members because I thought they were different, but after going through, I realized they can have fun and do “normal” stuff because they are normal people.”

After the many experiences and relationships Franklin formed over the years, he plans to become a mentor at PYD in the future.

“I want to become a mentor and engage in more of what PYD does,” said Franklin. “I want to become a part of the family. The people there are so charming and are the best. There’s someone you can look up to and talk to. They’re just really cool people.”

If you or anyone you know is interested in becoming a volunteer mentor at PYD, you can learn more about how to get involved at this link: https://www.pyd.org/programs/one-to-one-mentoring/.

This blog post was written by Erica Yoo of the BU PR Lab.